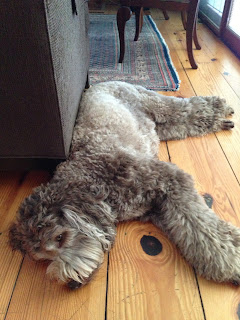 It feels important to post something today. It's 12/12/12. A date that is cool, but also melancholy. It's a triple header, a three lemons in the slot machine day. Or is it a three dollar signs day? To realize I’ll never live another date like this. Anyway, any time I’m aware it’s a last for something, I get a little sad.

Twelve twelve twelve. It was a perfectly nice day. I interviewed a perfectly nice person at the food co-op, and I bought some perfectly nice groceries. Then I took my dog to the SUNY campus center for a therapy dog event. Milo was swarmed by stressed out undergrads about to take their final exams. He performed countless high fives on command, endured more than one vigorous and all-encompassing hug, and had many, many photos taken of him - all of them flattering, of course. He is much more photogenic than I. Or than the perfectly nice gal I interviewed at the food co-op today, who kept saying she looked like she was "on something" and begged for a redo on another day. Of course I said no way, lady. Okay, no, I did not. Then I came home and discovered the 9th grader was sick enough I felt she needed to see the doctor to rule out strep. Which is a perfectly fine way to ruin a perfectly nice day. The intrusion of misfortune and illness into an otherwise pleasant day.

The photography reminded me of the 5th grader the other day. She was petting Milo and photographing him AGAIN, and I said we had more pictures of the dog than of us, and she said, off-hand, that she wanted to make sure she remembers him. I was struck by how loss was on her mind. Or, to be really upfront about it, death. He's only three-and-a-half. I wondered at her, only 10, thinking that way. But of course “only 10” is so patronizing. After all, she’s at that point where the abstract thinking and the concrete and the idea of mortality and other abstracts are cohering in her. There’s a good title. Mortality and Other Abstract Ideas. Sounds like an academic paper, doesn’t it? The point is that I think kids that age have all the structure in place, and it hasn’t yet been worn down and modified by peer pressure and relativism and tolerance. You know, put that way it doesn’t at all sound like what I’m trying to say, which is that they’ve got morals and ethics and an ethos, and of course these have all been shaped by external influences, but they somehow seem purer than what happens later. Maybe it’s just that they tend to be more absolute now, because perhaps circumstances haven’t required them to equivocate or rationalize, to embrace relativism in a way that throws into question their bedrock beliefs.

Am I just describing narrow minded extremists? Possibly. Maybe I admire narrow minded extremists for having clear beliefs. Whereas for me, I recall a time of knowing my own mind about various issues  and of believing my opinions to be correct FOR ME. Whereas later on I temporized. Experience, or observation of friends’ experiences made me question my stances. So I see girls of 10, 11, and 12  as fully formed in a purer way than say, a twenty-something, who may have more experiences and more tolerance, but also more confusion about where she stands.

Does this have any relation to mortality? I mean, Readers, we have to deal with it. I concur with those who suggest we are always dealing with it, even if, or especially if, we appear not to be. Frantic struggles for success and achievement, fear of losing control that morphs into all kinds of tics and strange behavior. At bottom fear of death. Yes. It sounds a bit trite, but I think it’s true. Just because you’re not wallowing in despair over the pointlessness of it all doesn’t mean you’re unaffected by the reality that we have to die, we have to lose things we love. Like our dog. It was a sweet moment with the 5th grader photographing Milo, and I have enjoyed 12/12/12, despite knowing I'll never live it again.

Email ThisBlogThis!Share to TwitterShare to FacebookShare to Pinterest
Labels: gratitude