The Dough Followed the Bread! 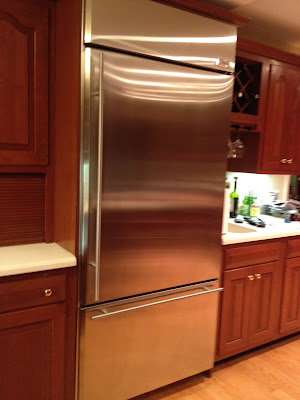 The first full week of school finds me a little calmer than last week. The refrigerator is here—or most of it. There’s just a toe plate missing, but hey, did you expect the whole thing to arrive at once? I didn’t. The thing works, and the produce is now in the humidity-controlled produce bins and not crammed amongst the milk bottles. The 9th grader has found people with whom to eat lunch, and one of them is even named “Silken,” so that’s good. The 5th grader has exchanged gifts with her “boyfriend,” so that’s good. (?) And I’ve triumphed over bureaucracy, too. The transportation people listened to my suggestion about the bus route and are implementing it, starting tomorrow.  Yay, me!  I’ve only had one unnecessary visit to the doctor, who very gently told me that armpit pain and fatigue don’t fit the rubric for West Nile Virus as much as for, uh, muscular pain brought on by too many Sun Salutations, and fatigue because of, possibly, too little vitamin D or sleep, or just because of life.  So, you know, overall, things are better. Although who can be sure it’s not something worse than West Nile Virus? I mean, besides the doctor? No one, I tell you. No one. But I’m fine, readers, really.

And then there was the baker I interviewed for the food co-op newsletter. An Amazon of a woman, mother of three, who is piloting the new bread program at the co-op. She works four nights a week from 2 a.m. to 8 a.m. or something insane, then goes home and sees her children off to school, and tries to sleep.  When I interviewed her, she’d been up all night, but she was so enthusiastic about her bread and all the beautiful details she puts into it, and how she studies the customers’ buying patterns to determine what sells and how she lovingly arranges her loaves in a display with accompanying greens, that she practically blew me off my chair. So I asked her how she was managing the scheduling, and she said that becoming a baker was a recent career choice, and that before she’d had kids, she’d worked in healthcare and started nursing school, and now that her kids are in middle school and high school she felt like she could look at her professional life again. She decided that even though nursing would be a more practical choice, she was going to go for what she loved to do. And then, as if she were a living testimonial ripped from the pages of Do What You Love, the Money Will Follow, she said that after she went to culinary school, she spent several months figuring out how to get a job as a baker. One day she came to the co-op and just decided, on a whim, to ask if they needed one. It turned out they'd just decided to start the bread program, so she had a job. Then, on top of that, she said that because she was doing what she loved to do, the hard parts, like working nights, and like feeling like getting three whole hours of sleep in one twenty-four hour period was “wow,” things were going to fall into place.

"When you do what you love," she said (with no prompting from me), "things shift." You work with a "different purpose," and the inconveniences are not problems. "I know in future everything will fall into place," she said.

As I listened to her rapid-fire speech and considered her shiny, bright-eyed, sleep-deprived face, the thought--drugs-- did occur to me. But that was uncharitable. This dame was powered by pure satisfaction.  Could I have asked for a more serendipitous interview?

Email ThisBlogThis!Share to TwitterShare to FacebookShare to Pinterest
Labels: Do What You Love and the Money Will Follow, happiness, money and success