So, while I’ve been compiling my ideas about success, I’ve been trying to be practical, too. All this with an eye on that stack of self-help books. I want to see what I’m accomplishing without them, so I can compare how I’m proceeding before reading them to how I’m going to eject from my desk into the stratosphere once I’ve read them and started implementing their strategies.

Next, I needed to channel my favorite Type As. Since I don't match my socks to my underwear, and my long time friend who does is far away and hard to contact, I turned, as always, to a book.

Remember that list of stuff that I’m trying to accomplish at any one time? Well, cribbing from Gretchen Rubin, I decided to try charting my activities on a nice weekly grid, so that I could check off everything I was doing every day, check, check, check, without taking a lot of time.

I made a chart: 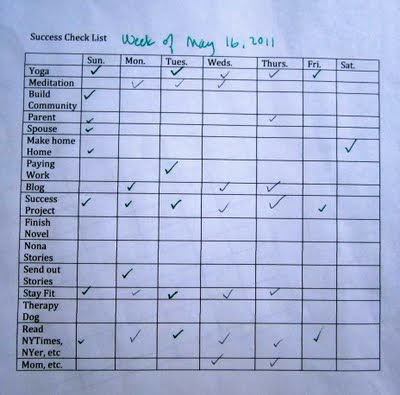 Did I mention that the husband stifled a smile when I told him I had done this? The usually so supportive and kind husband? Yes, it’s true. And it is also true that I’m really not a chart person. I’m more of a list person; rather, I’m more of a write-a-list-on-a-sticky-note-and-forget-it person. Still, it doesn’t hurt to try to imitate more accomplished people, and so I made a pretty chart.

Still copying –er, adapting--from Gretchen Rubin, I decided to keep the chart for 2 weeks. Even a rule-evader like myself could stick to that, if all I had to do was a quick check-off before bed.

By the end of the second or third day, I realized how much a check-mark could not convey about some of these topics, so I decided that after my 2 weeks charting, I’d spend 2 weeks keeping a daily log. It also quickly became clear that some of my categories were uncheckable. Perhaps unsurprising. Much of what I do is ongoing. I mean, when is it appropriate to put a check mark alongside “Spouse," as in "To Spouse?" After an argument is resolved? When we actually go out alone together? (Well, that will be blank for months). Similarly with "Parent," as in "To Parent." Still, I did put a check mark under those once or twice, if there was some issue that I had to deal with out of the ordinary.

I could go into detail about all the categories, including the ones I never checked in that first week. But I won't. I will say that despite the smirk of  the Usually So Supportive Husband, I stuck to it for 3 weeks before trying the log. I actually preferred the chart. Logging proved self-defeating. If I added details to what I’d done, then the information became repetitive, since I was already writing about it in a notebook. If I just listed things, then I felt as jumbled as I always do as a mom/writer/job seeker/human/spouse, etc etc. I started avoiding the notebook. It turns out I’m better at lengthy notes every few days, interspersed with interview notes and so forth. To record that I’ve accomplished tasks, the chart works for me.

Anything work for you?
Posted by Hope Perlman at 1:49 PM