My Mortal Enemies: The Jews, II

In this blog I thought I would tie up some loose threads by letting you know that I did get those pants cuffs redone by Mr. Delmar Tailor. It took another visit to the defensive tailor in which he insisted that he would never sew anything as badly as the hem on those pants, and several phone calls from him in which he repeated that he could find no receipt to prove my story, but he did finally offer to redo the pants for free. When I brought them in to him, he told me that although he hadn't found the receipt, that I had bothered to come back a second time had made him think maybe I was telling the truth. Good thing I'm an Aries and don't shy away from confrontation, huh?

The other loose thread was crazy Joe the anti-Semite in 3rd grade. So there was crazy Joe, and my 3rd grader, and me (see Wed., Oct. 27th post). After sleeping on it, I decided I ought to talk to their teacher about this incident. Not wanting to make a big deal out of it, I caught up with Mrs. M at dismissal and we sat down on a bench outside the school.  Without naming Joe, I described what my child had described to me, while my daughter squirmed in embarrassment.

Mrs.M was horrified, actual hand-over-mouth horrified, and apologized, which was interesting and unnecessary. She wanted to know how we wanted her to handle the situation and offered to speak to the boy. I told her not to single him out that way, but that since the whole school had been addressing the ever-popular topic of bullying, it might be an opportunity to discuss tolerance in other areas of life. If anything further happened, I said, we could consider direct action, but since I inferred that this child might not know the power of what he was saying, maybe he had learned a lesson just by saying it and getting the reaction that he did.

Then Mrs. M asked me who the child was. I was reluctant to say, but I did, and Mrs. M had a double-take reaction. Joe, she said, is from Yemen. "Ah," I said. "Yemen." Maybe the family is Muslim, I said. We nodded at one another on the bench.

This all happened early in the week before Halloween, and on the Friday, the papers were full of reports of packages containing explosive devices intercepted on several planes. Packages addressed, in some cases, to synagogues in Chicago. Planes flying out of Yemen.

I began to wonder if I should inform the principal, if not the superintendent -- or the governor. Visions of calling the police (not 911, have to call the non-emergency number) or Homeland Security, and the extravaganza of media attention and general goverment harrassment that would follow (I've seen a lot of movies) jostled for predominance in my imagination. Soon enough, I would become the subject of their inquiries, and my sordid past (I once watched two people shoot up heroin) would land me in jail. Alternatively, I could remain quiet, and suffer burning crosses on my lawn (perhaps that would get rid of the moss), and other subtler forms of harrassment, and eventually be arrested for NOT bringing to the attention of the authorities my suspicions about the family of this young boy in my daughter's class. A dilemma.

The husband was basically unmoved by the intrigue-terror-cell angle, so I made calls around to various family and friends. They were fairly split, but the friends who work in education felt pretty certain that the teacher would have already informed the principal. I let it rest, took the 3rd grader to the Halloween extravaganza at her school, and watched her play tag with a bunch of kids, one of them an exuberant gorilla. Joe.

Weeks went by. I heard from my 3rd grader that the guidance counselor had come in and talked about different religions, and that the teacher read them a story about how kind words fill your bucket and unkind words empty it, and that we should all try to fill each other's buckets. Finally, December conferences rolled around, and we went for ours.

After chatting and going over the report card, Mrs. M asked us if we remembered "our conversation on the bench" a couple of months ago. I said yes. Well, she said, Joe's mother had called her shortly after our talk, extremely upset. Joe had gone home the same day my daughter did, and told his mother what he had said to her. Mrs.Joe, horrified, had called up Mrs. M in a state, wanting to apologize to us and telling her that she had given Joe a big piece of her mind for what he had said, because they weren't like that. They do, however, have Arabic television on in their home, she said, so maybe he had gotten some ideas from it. 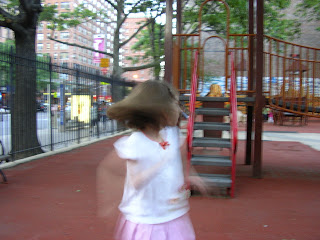 I'm not sure what Mrs. M told Mrs. Joe, but Mrs. M, my husband, and I discussed how we thought maybe Joe was just trying out a conversation topic. Mrs. M said that Joe is kind of shy, and also likes to be funny, so perhaps his offering about the Jews being his mortal enemies, was an unfortunate conversational gambit for a laugh from a girl he felt a little shy around and wanted to impress. Oops.

I left the conference one conspiracy short of righteous indignation, but glad that Joe knew he'd done something not right. I felt a bit better about my town, which had grown somewhat dark undertones in the last couple of months. I was able to congratulate myself for my (outer) restraint and posit that perhaps I had the start of a novel. When God snips a thread somewhere, sheheshe unravels a seam somewhere else? Something like that.
Posted by Hope Perlman at 7:44 PM

Email ThisBlogThis!Share to TwitterShare to FacebookShare to Pinterest
Labels: motherhood, principles and values